The concert and world premiere of The Tap Tap’s new music video „The End of the World - Cancelled“ will now be held at the Theater of Jara Cimrman. The full program of evening events includes a charity auction of rare Brazilian, Arabian and Cuban drum sets, from the estate of Martin Kreuzberga. This event features an exceptional showcase of drum performaces, showing the full virtuosity of a drum. 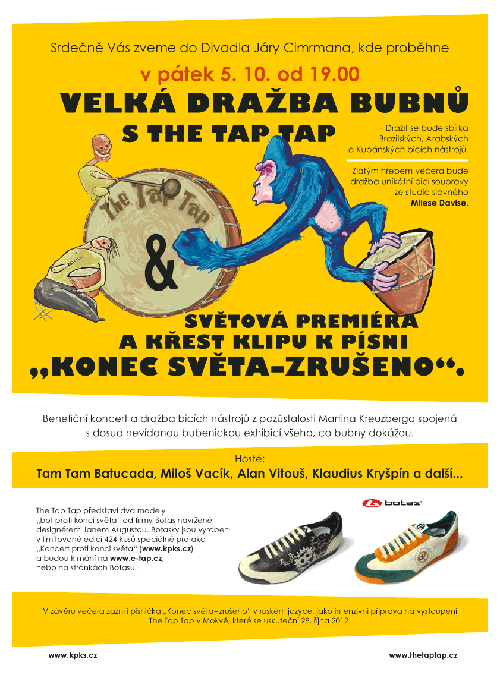 There will be no end of the world, not even in the music video by The Tap Tap „The End of the World - Cancelled“ Instead their music video is a parody of all kinds of speculations that appear to be rooted in various world religious systems. The video takes a sceptical view of such popular misinterpretations of religious symbols that create feelings of hatred towards those who are different. Still, far from being just a parody, it sends a clear message that the only right answer to these doom and gloom predictions is to activily face the problems of life, not to just sit and wait for fate to run its course. „That’s exactly what I like about The Tap Tap, instead of waiting they try to make things happen,“ said director and creator of the music video Radovan Síbrt. Tomáš Hanák, Xindl X, Mark Ther, Lucie Špačková, Jitka Hroudová, The Tap Tap, Šimon Ornest and the dog Čestmír all make an appearance in the music video for the song „The End of the World - Cancelled“. The video was filmed in a Barrandov studio in Hostivar.

The charity auction for a drum kit from the studio of Miles Davis will mark the highlight of this very special evening with The Tap Tap, a band made up of handicapped students and graduates of the Prague Jedličkov Institute. The song „The End of the World - Cancelled“ will be played in its original Czech version and at the end of the evening in its Russian version – in preparation for the concert in Moscow on the 28th of October. 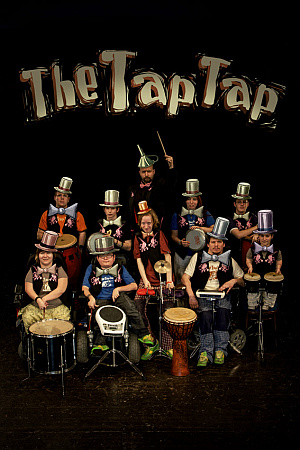 The premiere of „The End of the World - Cancelled“ will be the first of a whole array of events also featured in The State Happening and Charity Concert „Avert the End of the World“ 2012 (www.kpks.cz), organized by The Tap Tap on the 20th of December 2012, the eve of the anticipated end of the world according to the Mayan calander.

examples from the new music video: 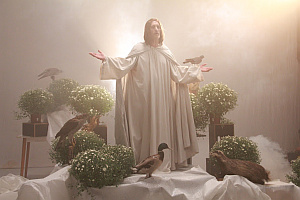 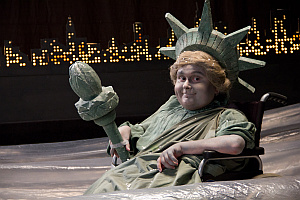 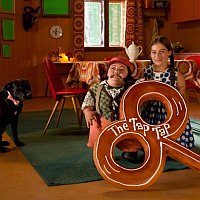