The first collection of botas 66 classic

botas 66 classic are without a doubt the flagship product of the botas 66 label. The simple shape and timeless design in combination with a graphic concept combined with coloured hide create an endless ride along the meeds and through the groves in lifestyle footwear. 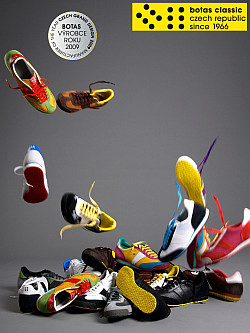 BOTAS first presented the model known today as the CLASSIC alredy back in 1966. The design was born by the pen of designer Marcel Scheinpflug and in the beginings it boasted hide from Mongolian horses. It underwent significant changes in the nineteen eighties (Milan Mlynář) and noted a dramaticcomeback in 2005, when botas shoes ranked among the top 100 icons of Czech design.

In 2008, this model was choosen by Jan Kloss and Jakub Korouš as the basis for their school project "botas 66" at the Applied Arts University in Prag. The result was the laurel prize for European design - ED Awards, subsequently mastering the National Prize for Student Design and adding the model to production!

Within the scope of the new sub-label - botas 66 - the first collection of sixteen designs was created for the 2009 season, with which BOTAS came in 3rd at the prestigious Czech Grand Design Competition in the "Producer of the Year" category. One year later, the new collection included 25 designs alredy and botas was basking in its glory. In 2010, botas was even awarded 1st place in this prestigious competition in the "Producer of the Year" category. Thanks to its success in the field of applied arts and a connection to the original shoe-making tradition, botas 66 is a representative of the Czech industry on the national and international scene every year - Designblok, Czech Selection in Milan or London.