Doubrava: It is a great shoe, but the victory will not guarantee

Those who wanted to win futnet ball or the long sold-out tickets to the World Championship in Futnet in Nymburk, these people hit the Botas store in Prague in Radlická Street 11 on Tuesday 27 November.

Two of the biggest (literally) Czech representatives Jiri Doubrava and Jan Vanke demonstrated there a new model of Botas, designed specifically for the Czech national team of futnet players for this year's World Cup.

While creating this unique collection, Botas intensively cooperated with the Czech team, considered its demands  and comments. Jiri Doubrava had the most of them, according to his own words. At the suggestion of Jan Vankeho shoes narrowed in order to have closer contact with the ball.

Like all Botas collections  were this one made in the Czech Republic, as Rene Doubek the sales director of Botas and the president of CNS Kamil Kleník mentioned. But the miraculous shoe is still missing something - a magical power. Jiri Doubrava says "the fact that you play in those shoes, will not guarantee your victory."

Sale of Botas Special Edition will begin on Friday 7 December in the Sport Centre Nymburk. 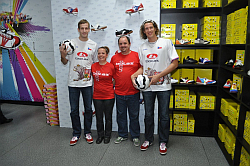 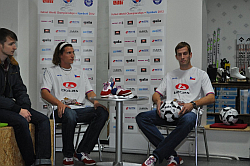